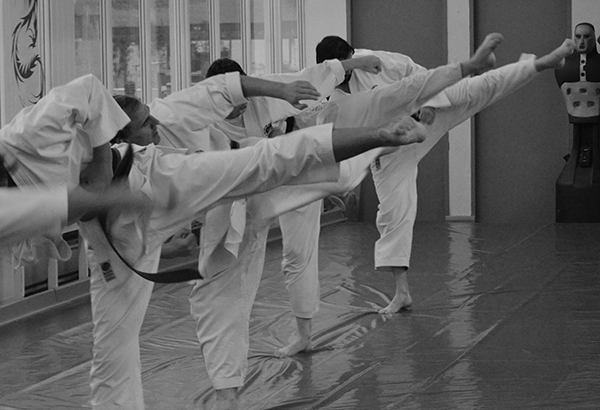 This page contains a brief summary of some of the more commonly used Karate Terminology a student will need to understand during their Karate journey.

All students should familiarise themselves with these terms, words and phrases which will be used during training sessions and gradings

All Karate Instructors at Staffordshire Martial Arts Academy will use these terms often, helping you to understand their meanings and pronunciations.

Gankaku dachi – crane stance, as used in the kata Gankaku.

Hachji dachi – open leg stance. The feet are positioned about one shoulder length apart and pointed outwards at 45 degrees. It actually translates to “figure of eight stance” and the true full name for this stance should be “soto hachji dachi” and when the feet are angled in at 45 degrees the name is “uchi hachji dachi”.

Musubi dachi – informal attention stance, Heels placed together but with each foot turned out at 45 degrees

Naihanchi dachi – kiba dachi, but with the feet turned in. funakoshi changed the name from naihanchi to tekki.

Tachi – standing or stance. To stand up would be tachigaru. In some older works you may also see zenkutsu tachi etc. instead ofdachi.

Teiji dachi – a stance with the feet in a “T- shape”

Haishu uchi – back hand strike. A strike with the back of the hand where the fingers are straight.

Te gantana uke – hand sword block, this is now most commonly reffered to as “shuto uke”

Awase tsuki – combined punch, or U punch, also reffered to as morote tsuki

Sanbon tsuki – a series of three punches, generally the first is oi tsuki jodan , followed by a slight pause ten, chudan gyaku tsuki, immediately by chudan tsuki, but it can be performed with three punches to the same target

Tsuki – a punch or thrust

Ashi waza – name given to all leg and foot techniques, ashi meaning leg or foot and waza meaning technique

Geri – kick when using the spelling geri it should be added to another wrd to describe the kick. Geri by its self would mean diahorrea also see keri and keru

Kakato geri – axe kick, striking with the back of the heel of the foot

Keage – “kick up” in karate we use this when describing snapping as oppose to thrusting kicks.

Keri – kick, you will see kick spelt this way. Keri by itself is a noun meaning kick coming from the verb keru “to kick”, the normal spelling used is geri

Keru – kick, this is used when saying kick as a verb

Nidan geri – double kick, as seen at the end of the kata kankudai

Tsumas geri – kicking using the tips of the toes to strike with should only be used to attack the soft parts of the opponents body e.g. groin

Age uke – upper rising block. Used generally to guard against an attack to the face

Ashibo-kake uke – leg hooking bloc, in which the leg is raised to the side and swung in a circle to deflect an opponents kick to abdomen

Gedan barai – lower level sweep. Normally the move students make prior to going on to do their combinations, one of the reasons for this is so that the first move in karate is a block which demonstrates that karate is for self defence. When we call gedan barai it is really short for gedan barai uke

Haishu uke – back hand block. A block using the back of the hand

Nagashi uke – sweeping block. This is one of the three times nagashi is referred to as sweeping

Seir yuto uke – ox jaw block. A hand technique delivered with the base of the shuto (knife hand)

Uraken uke – back fist block. For when the back fist is used as a block. This application is seen in the kata heian nidan